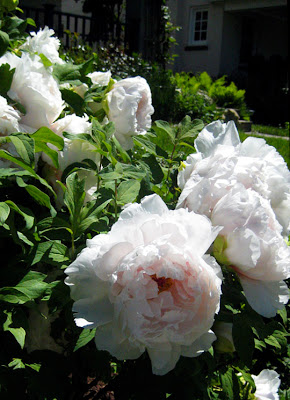 This morning the green fists of the peonies are getting ready
to break my heart
as the sun rises,
as the sun strokes them with his old, buttery fingers

and they open ---
pools of lace,
white and pink ---
and all day the black ants climb over them,

boring their deep and mysterious holes
into the curls,
craving the sweet sap,
taking it away

to their dark, underground cities ---
and all day
under the shifty wind,
as in a dance to the great wedding,

the flowers bend their bright bodies,
and tip their fragrance to the air,
and rise,
their red stems holding

all that dampness and recklessness
gladly and lightly,
and there it is again ---
beauty the brave, the exemplary,

blazing open.
Do you love this world?
Do you cherish your humble and silky life?
Do you adore the green grass, with its terror beneath?

Do you also hurry, half-dressed and barefoot, into the garden,
and softly,
and exclaiming of their dearness,
fill your arms with the white and pink flowers,

with their honeyed heaviness, their lush trembling,
their eagerness
to be wild and perfect for a moment, before they are
nothing, forever? 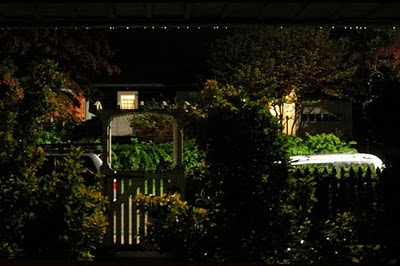 Home late in the rain-
my sleeve, glimpsed in the hall glass,
embroidered with pearls-

For the prompt of Night Rain on Haiku Bones
Posted by Nancy Bea Miller at 3:35 PM No comments:

SUNSHINE
is this week's prompt over at Photo Friday and I thought I'd post this shot I took yesterday while visiting Camphill Special School. A few years ago the school bought nearby Beaver Farm to enlarge their transition program for 18-21 year olds with special needs. There is a desperate need for programs for this age group, and Camphill is hoping to provide many more young people with a wonderful place to learn skills and self-reliance in a healthy, wholesome farm atmosphere. They recently started construction on several buildings which will eventually provide housing and classroom space for many more young people than they currently can serve. This is a wonderful thing...and very unlike the usual heart-rending scenario of bull-dozer + old farm = suburban sprawl. This is all about creation, not destruction!

Even Floss the farm dog can feel the good energy, obviously!

What lies behind us and what lies ahead of us are tiny matters compared to what lives within us.
~Henry David Thoreau
Posted by Nancy Bea Miller at 10:40 AM No comments:

We Got By
with a little help from our friends! Henry was home for two weeks of spring break, which is a long time for an autistic kid to be without a schedule. Also, various nuances led me to suspect that I was not going to be receiving any outside help...and unfortunately my intuition was correct! Henry's TSS had car trouble and never appeared, his BCM was only available once for a 60 minute period, and the promising young man I was recommended to for some Henry-sitting did not return my call. I am my own Cassandra sometimes, alas!

So, I turned to my friends and boy did they ever come through! Words cannot express how grateful I am. Here is a photo gallery of Henry's spring break featuring many heroic Henry helpers:

Started off the first week with a trip to a local mall, where Henry has a fun routine of fountain watching, cinnamon sticks eating and carousel riding. My friend Alex T came along with us for that one!

Henry on the carousel. Many thanks to the kind carousel attendant who let me ride for free when Henry refused to let me leave his side!

We visited friend Renee D and had a little conversation and applesauce. Henry was feeling a mite camera shy that day!

Went to the zoo with another Camphill Special School parent, Lainey M, and her daughter Leta. Leta and Henry really liked riding the kiddie train together (about their only moment of shared enjoyment, but better than nothing!)

Visited my friend Katie and "helped" her study for her Taekwondo examination. She passed, due I am sure to Henry's silent coaching. Actually, Katie was a trouper and entertained us TWO times during the break...a purple heart of friendship for Katie!

We had a wonderfully happy and enjoyable visit with old friend Nicole N who recently moved. Nicole and I met when our oldest boys were 4 or 5 months old. We enjoyed seeing her adorable apartment and took a lovely walk in her new neighborhood, with the high spot for gourmandoise Henri being a visit to a superb little cafe for a snack.

Another vacation hit was a visit to the Please Touch Museum as guests of my friend Sarah B. Henry really loved it, especially the huge water world room and the incredibly beautiful and gleaming carousel. I may have to buy our own membership to this place, even though the rest of the kids visiting it seemed to be about 3 to 6 years old! The staff there were wonderful and not at all fazed by my super stretched out little kid (Henry is 16, and 6 foot 4!)

Road trip to Boston! My sister and brother-in-law Carol D and Charlie R warmly welcomed us for a two night stay in bean town. They had an incredibly busy weekend already in motion but generously made room in their lives for our visit. Here they are with Henry at the Arnold Arboretum.

While in Boston we had dinner with old college friends Ned B and Sue S and their handsome trio of sons. Their oldest son Nat has some similar challenges to Henry and those two really seemed to bond over hilarious bowls of ice cream! Who knew ice cream was so mirth-making?!

Sue, Henry and Paul enjoying that after ice-cream rush.

Henry and his brothers and Boston cousins. Smells like teen spirit (I hope!)

Stopped by my brother Jim and his wonderful family in CT on our way home. We got to join in a family cookout to celebrate my nephew N's birthday. This may seem tame to you, but we live far from all family and these little mundane familial events are a big treat for us! My parents live not far from Jim and came too, and it was great to see everyone. Henry observed the elaborate martial arts action displayed by his brother H and cousins but decided he was on the side of whoever would give him more potato chips.

Home again, we went to the Morris Arboretum with my friend Kim P, who was an admirable lookout during Henry's illicit water-feeling activity!

We had an unexpectedly fun trip to a fabric store with my friend Eliza A. Henry enjoyed walking through the colorful aisles and his joy was complete when we discovered they sold Rice Krispy Treats by the checkout counters! Eliza also stopped by another time during the break and we had tea (with chocolate milk for you know who!)

We ran an errand for my friend Pat F, and we delivered a package to her sister Joan's house. Henry really liked Joan's taste in art, as well as her husband's taste in apple pastries (he made himself right at home!)

Henry and I had a double playdate with Camphill parent Carol L and her sweet daughter Sammi who is Henry's friend from school. We visited their gorgeous home and then went to Longwood Gardens together.

Henry absolutely adored Longwood (may have to get a membership here too.) Watching the Versailles-like fountains and feeding the giant catfish were wonderful. There was some whining (S) and vomiting (H...argh!) but overall, this was a great expedition.

We stopped in for a quick visit with my friend Gretchen W at her doll-making studio. Henry loved this little visit, and obviously felt right at home with Gretch, whom he had never met before (she's just that kind of person!) Somehow he just knew she has pretzels and ginger ale in there!

Also got to drop in and see buddy Mary W who was busy preparing for a fund-raising gala with a Wizard of Oz theme. Hen was not so sure about being in the land of Oz.

Of course, the biggest Henry Hero of all is his father Paul! Paul made sure to come home early as often as possible and take Henry on tandem bike rides (something he adores!), drove him around, encouraged us to visit the shop (always a pleasant little diversion) and did a million other Henry things as well.

A few people, like Fay S and Elisa A, made plans with us that fell through due to weather or other unforeseen issues, and several others made outing suggestions that did not work due to scheduling conflicts, but I am happy they tried. Thanks too to all who could not join us in real time but sent love and encouraging words. For those who gave us the priceless gift of your company, well, thank you a million times! Henry and I simply would not have made it (so happily) through these weeks without your tangible love and support!

Taller (eek!) and smilier (yay!) than ever, Henry is home from his special needs school for two weeks of spring break! When I think of the term spring break in relation to Henry I think of Ernest Hemingway's famous lines from A Farewell to Arms:

The world breaks everyone and afterward many are strong in the broken places. But those that will not break it kills.

I will be busy being broken by Henry's break for the next two weeks, so forgive me if I am slower than ever to blog, return calls, comment on Facebook posts etc.
Posted by Nancy Bea Miller at 9:49 AM No comments:

HAPPY SPRING WEATHER!
At last. It was a gorgeous weekend here in the mid-atlantic united states. Hope you had enjoyable spring holidays, of whatever persuasion (or even just sun worship.)

P.S. This is not our late lamented cat Daisy, despite the resemblance! This is my friend Pat's sweet kitty, Nosy, who I visited with on Saturday.
Posted by Nancy Bea Miller at 9:12 AM No comments:

Homegrown
I was visiting my friend Pat today on her beautiful little farm, and as usual she gave me a box of eggs...they are almost too beautiful to eat! I think the little greenish-blue ones are laid by Ameraucana hens, also known as Easter Egg chickens for obvious reasons!
Posted by Nancy Bea Miller at 9:12 PM No comments: