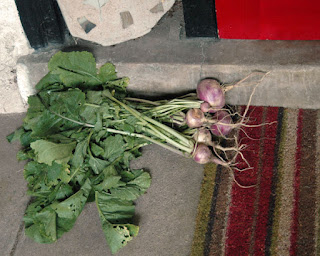 (I have such cool neighbors.)
Posted by Nancy Bea Miller at 8:02 PM No comments: 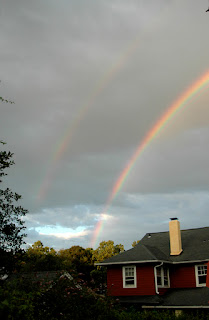 A double rainbow
brilliance and its subtle twin-
which is more lovely?

Posted by Nancy Bea Miller at 10:04 PM No comments:

The Lord, the Almighty: Henry Downs

Last weekend was Henry's graduation from the 12th grade program at Camphill Special School. (He will be continuing his schooling there for a further three years in the Transition Program so we are not completely through with Camphill yet, thank goodness!) We were told that graduation would have three parts; a class play, a celebratory luncheon, and a graduation ceremony. I somehow did not realize how complex and how long the whole event would be, and I would never have expected that Henry could take quite such a sustained and integral part in it if I had. I am filled with awe and gratitude.

The play was a full two hours long, a full-scale production of Goethe's Faust, modernized by Henry's classroom teacher Andreas Schuske. It involved speeches and singing and dancing and dialogue and a kind of poetic "movement art" called eurythmy. The performance was so long, and with so many scene changes that there had to be an intermission to give everyone a break. But wow...I can't express how intense, serious and joyful it was.  Immensely cathartic, which I suppose was the point. Did I mention already that Henry played the part of The Lord, the Almighty? Oh, I did? Well, I can't help being astonished. And proud. And humbled. He did an incredible job. Who would ever have thought such a thing possible? The folks at Camphill, obviously.

Then came the massive luncheon in a huge fancy tent, with tablecloths and silverware nice enough for a wedding. Henry waited patiently, eyeing the long buffet groaning with delectable home-made foods. A few speeches and then came the all clear for the meal to commence. It was a joyfull feast! 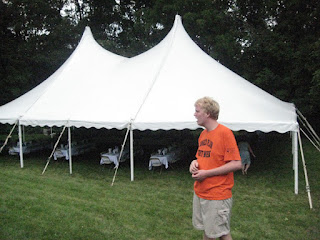 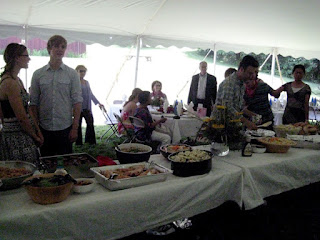 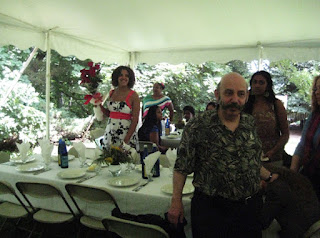 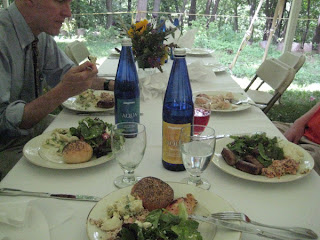 After an long and intense performance followed by such a huge and resplendent meal, a few hours of rest were in order. Then came the graduation ceremony itself. It was a moving and complex ceremony, one that lasted two and half hours! Henry processed with his class, sat in his chair listening to speeches, stood to participate in various ceremonies, presented his first teacher with a rose, accepted a gift and tribute from his house parents, waited patiently through to the end and then recessed with dignity. Two and half hours. I could almost not believe it was possible. Except that's what my watch (and my numb behind) told me.


What was especially astonishing to me was how this entire day embodied the Camphill philosophy that these special children be treated with respectful expectations of what they can do. HIGH expectations that is! It is amazing how often people of all kinds will obediently fulfill our ideas of how they will act. I am deeply grateful to Henry's teachers, houseparents, helpers and the entire Camphill community for holding fast to their principles and showing us what is possible.


Oldest son Peter left home today. He's taking a gap year before starting college, and has a job and apartment lined up on the other side of the country, in the Bay Area.We have family there, thank goodness or I think I would be completely beside myself instead of only half beside myself.  It's hard to explain the feeling: perhaps a mixture of happiness, pride, shock and utter desolation.