So, wow, this was an eventful day! I went to school to discuss my semester's critic choices and turn in that form. While I was there I dropped a few things off in my new studio too and then wandered around the studio floor a little, trying to get more acclimated. I was standing in my studio chatting with another first year mfa student (we were having an animated discussion on the work of Judith Schaecter) when the floor started vibrating and the lights started swinging gently. I assumed it was just some construction work and kept talking but the other student at once said "What is that? Is this an earthquake? I think this is an earthquake." I replied somewhat lamely, "Oh, don't you think somebody is just using power tools?" but yeah...turned out to be an earthquake. Totally bizarre! We so rarely get earthquakes in Philadelphia. 5.8!
People swarmed out into the corridors and there was a lot of nervous laughter and many expressions of astonishment.  Then we all calmed down and went back to what we'd been doing.  About a half hour later though the alarm system sounded and we were told to evacuate the building! All very weird and exciting.  People hung out on the street (some of the students started a game of kickball) and talked and stared up at the tall buildings and felt very keenly the bizarreness of the whole situation! It was a gorgeous day, with bright sunshine and refreshing breezes, while overhead News choppers hovered and police and fire sirens wailed in the distance. At one point I happened to be standing next to a school administrator  who wise-cracked that they had arranged this specially to make it an unforgettable Orientation Week! Aw, what a school! Seems like nothing is too much trouble for us MFAs. ;-)
Took me a while to get home. Turns out that SEPTA's schedule was temporarily halted and long delays were forecast so I walked back to the school and put in a little library time (even found another image for my Women in the Act of Painting project: yay!) I waited an hour or so and then tried again. Much the best idea: as I walked onto the platform a train scheduled for an hour previously was just drawing up.  What a day! Home a couple of hours later than expected but still in good time to make dinner.
Posted by Nancy Bea Miller at 9:00 PM No comments: 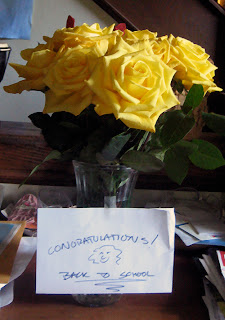 This was the first thing I saw when I walked in the door after a long day of Grad School orientation! What a sweet husband I have! It was an exciting, exhausting day.
Posted by Nancy Bea Miller at 10:02 AM 2 comments: 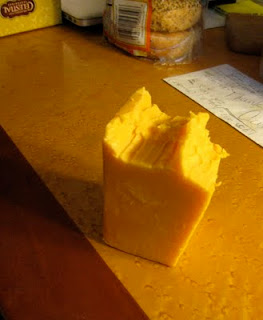 Turn your back for one minute in this crazy house and people are making art out of whatever comes to hand! In  Henry's case, a purloined hunk of aged, extra-sharp Cheddar. Notice the fine "tooth-mark" detailing characteristic of this artist's technique. ;-)
Posted by Nancy Bea Miller at 9:34 AM No comments: 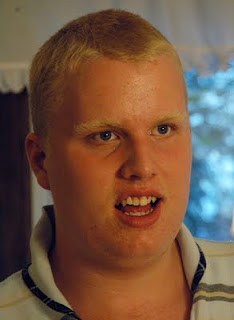 Henry is home and sporting a summery close-cut hairstyle thanks to the supremely talented Adriano! I keep hearing other Autism Parents lament how their kids resist haircutting but Henry never has done that for some reason! I admit to missing his flowing golden locks when he gets buzzed like this, but Paul likes this look better. Henry doesn't seem to care either way! ;-)

Posted by Nancy Bea Miller at 11:48 AM No comments: